Towards the Economy of Francesco

Following the rescheduling of ‘The Economy of Francesco’ event by Pope Francis in November 2020 in Assisi – Italy, the SeDEC is organising a parallel event in the form of an essay-writing/public presentation contest for the benefit of Grade 11-13 learners of Catholic colleges.

Mostly destined to those studying commercial subjects like Economics, Business Studies or Travel & Tourism, this contest brings participants to reflect on alternative environment-friendly notions of the economy that foster inclusion, social justice and fair treatment of the human capital in a SIDS like Mauritius. In so doing, they will propose avenues about how, in the very words of Pope Francis, “today’s economy may be changed in view of giving a soul to the economy of tomorrow”. As part of their preparation, participants are encouraged to familiarise themselves with the life and writings of Saint Francis of Assisi, who took care of God’s house by first ridding himself of all worldly possessions and living as a poor amidst the poor.

The above-mentioned ‘Towards’ event is open to Catholic colleges that had expressed an interest in the project by participating in a working session for Economics educators conducted last February by Mr Jean-Paul de Chazal on sustainable eco-friendly economic models. 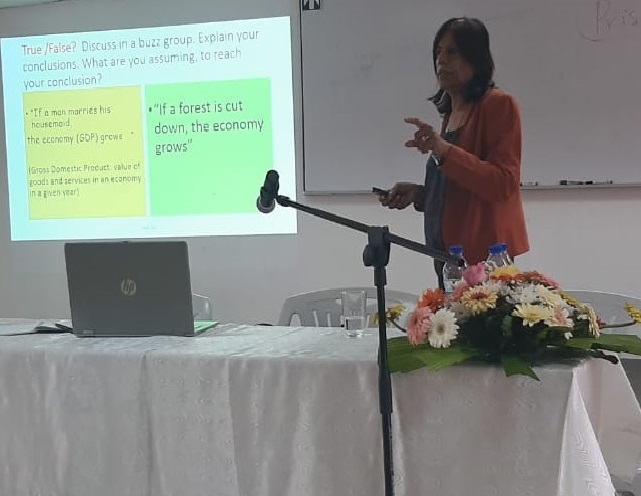 So as to properly empower prospective participants for the contest, the SeDEC has convened them to a capacity building session on various components related to the event, on 24 September 2020. Students and tutors coming from ten colleges attended the session facilitated by Mrs Nalini Burn (human/gender/labour rights-based approach to the economy), Mr Pierre Dinan (ecology and the economy) and Dr Khalil Elahee (sustainable energy management in a SIDS context). All those in attendance have expressed their deep satisfaction at the diversity of insights obtained from the resource persons, who challenged them to think beyond mere theories through real-life case studies. The SeDEC would here like to associate itself with the attendees to reiterate its gratefulness to the facilitators for generously helping to broaden the perspectives of these young people.

As way of reminder, participants have until Friday 16/10/20 to submit their essays, following which the best three teams will be qualified to make a public presentation for the finals. The victor and runners-up will be announced during the last week of the current school term, late November.

Good luck to everyone!

The 1989 UN Convention on the Rights of the Child

The 1990 World Declaration on Education for All